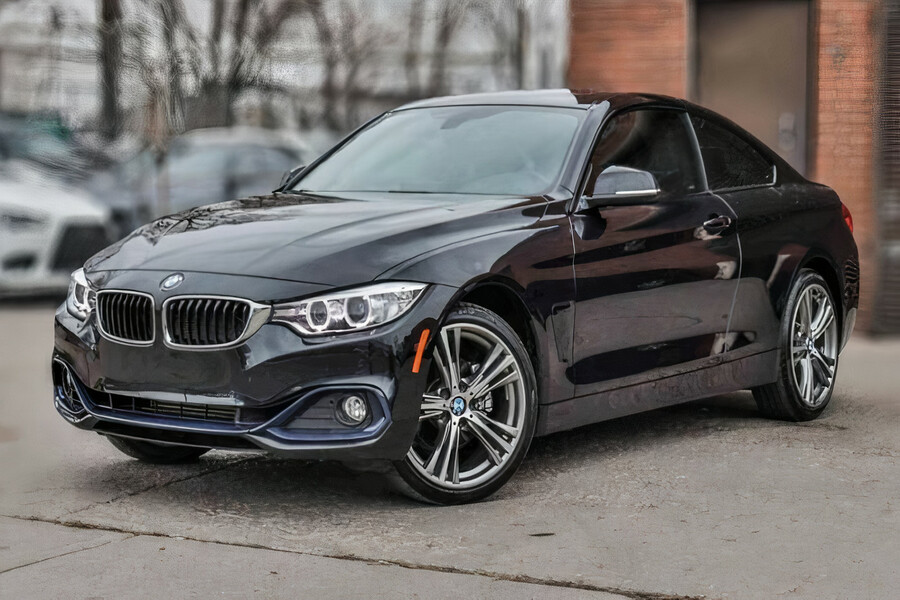 For driving enthusiasts, nothing is more exhilarating and relaxing than sliding into the driver’s seat after a long day – or any time of the day for that matter. It’s the feedback in the steering, the G-force on acceleration, the incredible focus you feel when you’re putting the car through its paces. And a sporty appearance doesn’t hurt either.

Shopping for a sports car on a budget can feel like it limits your options, but there are plenty of great choices available without breaking the bank. Here are six of the best sports cars under $30,000 for drivers in Ontario, Canada.

It poses as a luxury car but takes our word for it – the BMW 4 Series coupe is a veritable sports car. No car owners brag about their handling more than a BMW owner, and that’s because the steering feel and response are so darn precise. It’s sexy 17”, 18”, or 19” wheels look sharp but the low-profile tires are what contribute so much to the fantastic handling.

Engine options available are the 240-hp turbo 2.0L engine in the 428i and the 300-hp turbo V6 in the 435i, but you can’t go wrong with either. Purists will want to chase after a 6-speed manual that’s paired with the 2.0L engine, or you can choose one equipped with BMW’s xDrive AWD system.

All the other gear – heated leather seats, dual-zone climate control, a 6.5” iDrive display, and awesome factory sound – are great, but the Beemer is all about performance first. You can get a three to four-year-old BMW 4 Series starting in the mid-$20,000 range.

A sports car doesn’t have to consist of just two doors, and the Acura TLX sports sedan is proof. There’s so much to love about this car from the Jewel Eye LED headlights to the low, swept-back silhouette. Being Honda’s premium line, you’ll get the finer things in the TLX, like a leather interior, driver-assist technologies, rain-sensing wipers, and ELS Studio 10-speaker audio system.

But when you’re looking for a sports car, you want one that’ll tickle your senses as you drive. The 206-hp TLX four-cylinder isn’t bad, but the 3.5L V6 with 290 hp… now that’s performance. Shred the tires on acceleration if you wish, with either FWD or AWD available. Amplitude Reactive Dampers smooth out all the bumps, and all that driving tech will keep you firmly on the pavement.

Sure, it’s a sedan but when life requires more than two doors, the Acura TLX is a great option for a sporty, practical daily driver. You’ll easily keep under a $30,000 cap with a two to three-year-old model.

Audi has always been known as a sporty premium carmaker with their S-trims and RS lineup. But even with the Audi A7, you’ll definitely forget it’s a German luxury car and not technically a sports car. Check out the aggressive grille and LED headlights and the coupe-like hatchback roofline that drops toward its dual tailpipes. There’s just something special about the A7.

Inside the cockpit – yes the cockpit, because it feels like a fighter jet – the A7’s bolstered seats hold you firm in their heated leather upholstery. Drop the 8-speed tranny in gear and the 3.0L V6 is going to set you back in your seat. With 333 hp and standard Quattro AWD, the tires grip and go. Slam through a road course or hit the open highway with the A7.

It might not be your typical sports car, but it certainly fits in the category. Play your cards right and you’ll find a three-year-old model for under $30,000 and still be eligible for Audi finance deals.

Hyundai has developed a reputation as an underappreciated carmaker that produces awesome cars with amazing value. In the sports car segment, the Hyundai Veloster leaves its mark as a phenomenal choice. For under $30,000, you can get into a 2020 Veloster Turbo that not only has a uniquely sexy look but a performance that will make you fall in love.

The 1.6L GDI four-cylinder is turbocharged to produce 201 hp and can be paired with your choice of manual transmission or DCT gearbox. Either way, you’re guaranteed to have a riot in the driver’s seat. Standard features include 18-inch alloy wheels, LED headlights and taillights, nifty body accents, leather heated front seats, and a-rockin’ Infinity sound system with eight speakers and an 8-inch touchscreen display.

It’s a no-brainer to explore the Veloster lineup if you’re looking at sports cars on a budget. You’ll find the 2020 Hyundai Veloster Turbo starting under $30k, and you’ll have access to Hyundai financing deals that make it super affordable.

It might look like a typical business sedan, but that’s the beauty of it. The Audi A3 is all work in the daytime and all play when the 5 o’clock bell rings. Owners rate it top marks for performance on Cars.com due to its 220 hp four-cylinder engine with available Quattro AWD, although FWD tends to be enough for most.

Along with nimble, German-designed driving precision and dynamics, the A3 kills it on value. HID headlamps, dual-zone climate control, multi-level heated front leather seats, and sleek 17-inch alloys are just the start of its awesome content.

Being just a two-year-old model, you can get Audi financing terms of 72 months in many cases on an A3 that’s toeing the $20k mark, making the German luxury car an affordable sleeper sedan-slash-sports car.

This vehicle selection comes with a timeless movie suggestion: The Italian Job. It might not seem like a traditional sports car, but the MINI Cooper goes full tilt in fun mode. The throwback profile and bubbly personality it exudes just screams that it’s ready for a revved-up ride.

Under the hood, the MINI Cooper’s standard 1.5L three-cylinder produces a modest 134 hp, but that’s more than enough for a vivacious ride when paired with its six-speed manual transmission. If you get the chance, the turbocharged Cooper S amps it up to 189 hp for some surprise tire chirps on acceleration. Being low to the ground, it sticks to the ground around curves easily.